Copenhagen Fashion Week Minus Me. 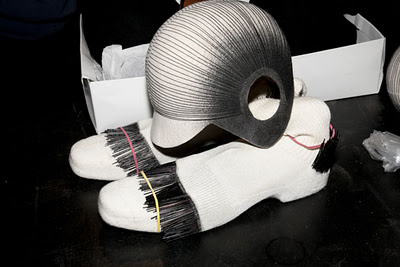 I don’ think there will be much rest for the fashionably wicked this month.  Berlin Fashion Week kicked things off late January 2012, but Copenhagen is the city that officially started my fashion month off.  Last year I was up front and center to some of the great shows in the city that turned me into a true cyclist, wedges and all.  Unfortunately, last week I couldn’t make it to CPH to see R/H’s AW/12 Kiss and Say Goodbye Show or have been lucky enough to have Jean//phillip‘s voluminous capes graze my knees in the front row, (wishful thinking).  I certainly missed out on biking around the city trying to get to all the shows throughout the day and  the after parties.  Or did I?

It seems everything happens for a reason.  Traveling all the way to the other side of the world, for a week during some snow storms and very cold weather, wasn’t going to work for me,  especially when the best way to get around in Copenhagen is on one’s bicycle. Then I would fly back to NYC and  get into the swing of things for New York Fashion Week.  Days after NYFW concludes, the real leg work begins when at least 3 main fashion trade-shows, Coterie, Capsule and D&A, set up shop in various parts of the city demanding our attention for 3 days only.  So happy I have my wedge sneakers ready to go.

It was for the best that, mentally and financially, I stayed in this fashionable city that I call home.  I did miss hanging out with my new friends from Copenhagen and Berlin, but they were always a Facebook email and comment away.

Let me introduce you guys to Kemara Pol aka” flavor enhancer”.  He is a talented photographer and writer for Andy Art Magazine, who lives in Berlin and covers his hometown and Copenhagen’s fashion week.  He is one of my contacts on the other side of the world and I couldn’t wait to read what he had to say about those 4 days I missed out on.  Now one thing I have to say about the fashion peeps I surround myself with, we are always the odd ones out, and we say it like we see it, no sugar coating, or any attempts  to impress the masses.  Either you love or hate what we’re about.

With all of that said, this is the first of several articles, from “Flavour enhancer” I will be sharing with you’ll. Thanks Kemara.

“Actually, it’s almost a tradition, that Henrik Vibskov rounds out the Copenhagen Fashion Week with the last show in the schedule. This time, however, the Danish creative decided to show on the first day of Fashion Week, and took so many designers that followed the wind from the sails.

Rumor was, the reason for the restructuring was because the Danish newspaper journalists refused for any reason whatsoever, to take the show in the weekend edition and the following Monday (ie today, 02/06/2012) appeared Henrik Vibskov and the journalists will probably, but too late in today’s newspapers to report even higher. Not so easy to consider all aspects of a fashion show. Nevertheless, to have this world-renowned designer spectacular fashion show in a class to the media under-representation probably worry more.

“Shrink Wrap Spectacular” – that is the name of Hendrik Vibskov’s new work of art. Anyone who follows the designer is already familiar  and has a better understanding as to what he’s talking about.  “when I say that the fashion showis only a part of every detail thought out staging. There are other shows where it is sometimes not absolutely necessary to be physically present and can be well examined via live stream or even in retrospect on the computer images.” Henrik Vibskov’s shows include but certainly not to, because not for nothing was the disused Carlsberg Brewery (in idle during the show, beer was consumed), filled to bursting.  Hendrik Vibskov’s shows while stuck again and again and yet full of surprises, we know what you get: a meticulously planned, self-consistent show that will not soon forget.

Inspired by music, and vibrating bass Trommen (tore even the most weary audience from the vegetative state), delivered a passionate artist and part-time drummer of the band a distinctly eccentric Trentemøller and bold collection from. New silhouettes with strong prints and unusual details such as caps, reminiscent of a conglomerate of old bathing cap and fossil shell awarded the collection an almost bizarre items of note. Seasoned with an authentic sense of humor can be said about the strange fringes socks away look that sees the designer as a hot contender except for the coming winter. But apart from these two accessories that you simply accept as a given because it must Henrik Vibskov and will be charged due to its art, its enchanting colorful and avant-garde collection, the entire fashion world.”


P.S . I translated this article using Google Translate, I couldn’t wait to share the article and pics! The original in German is Here 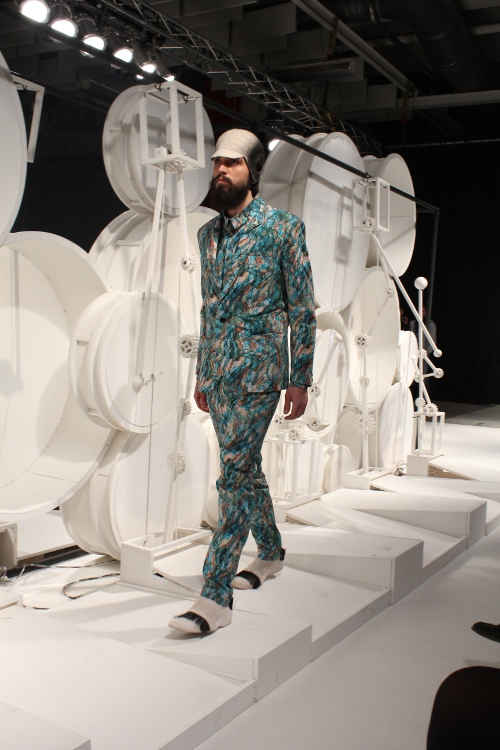 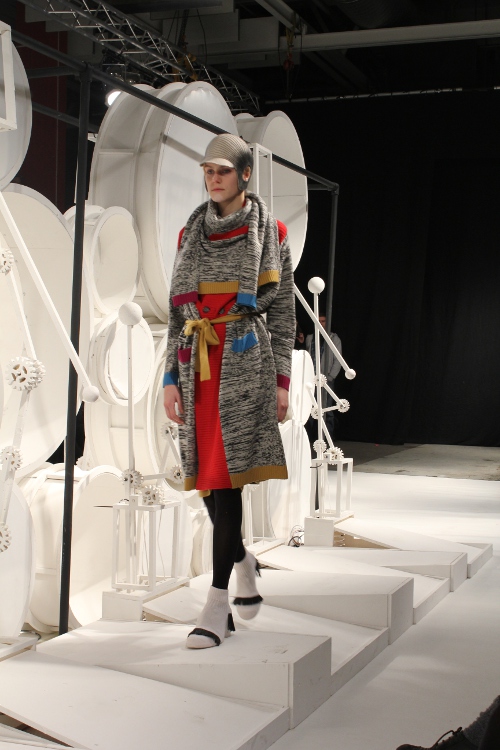 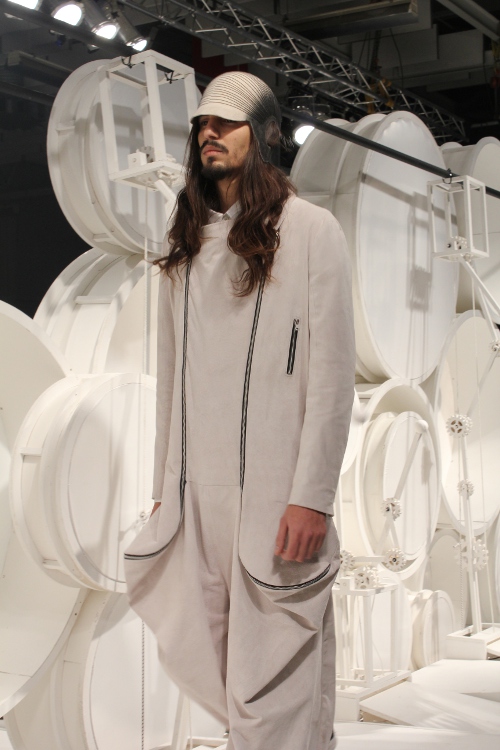 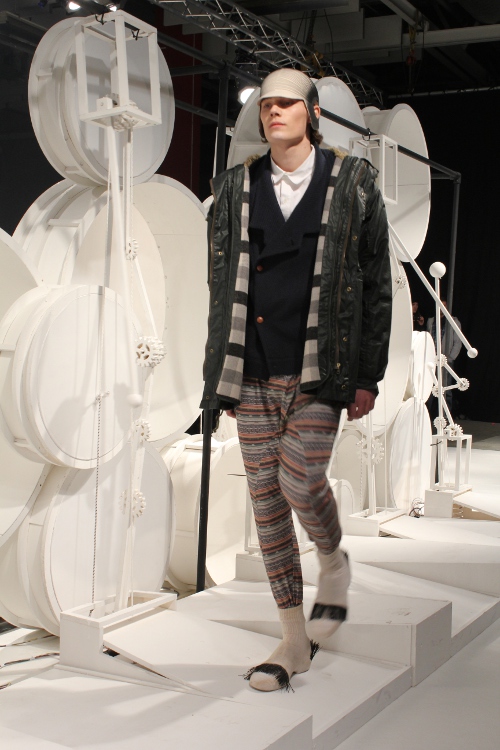 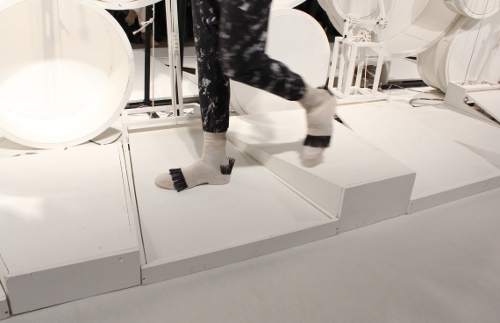 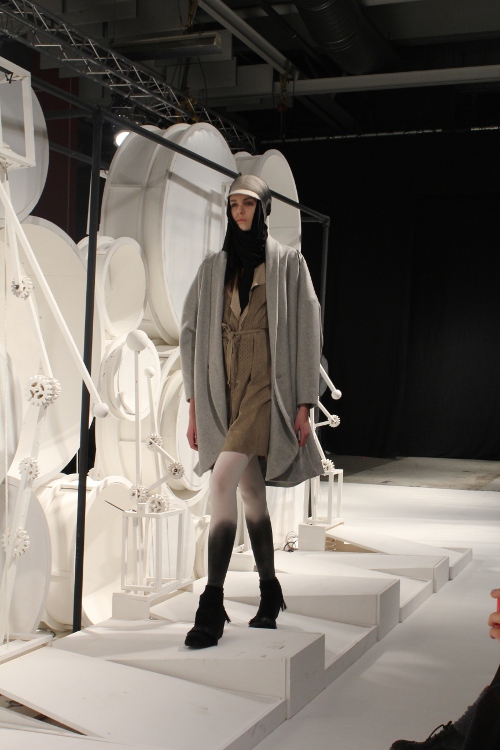 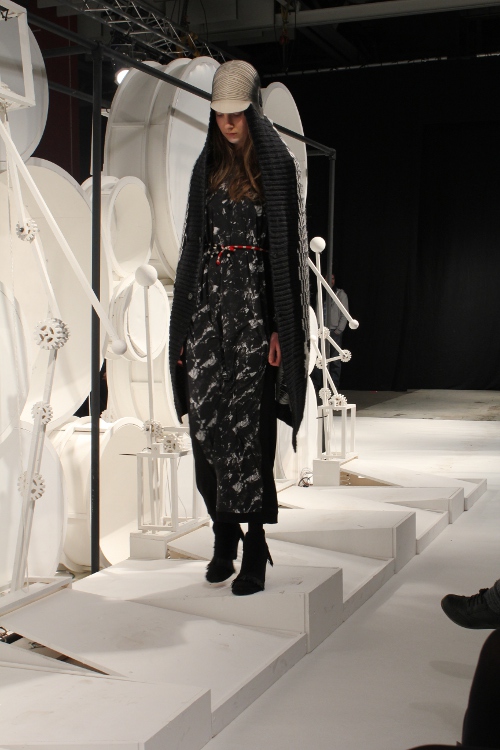 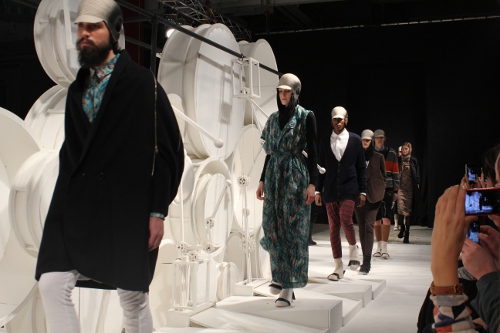 Stealing or Dealing: Falling For Fall. 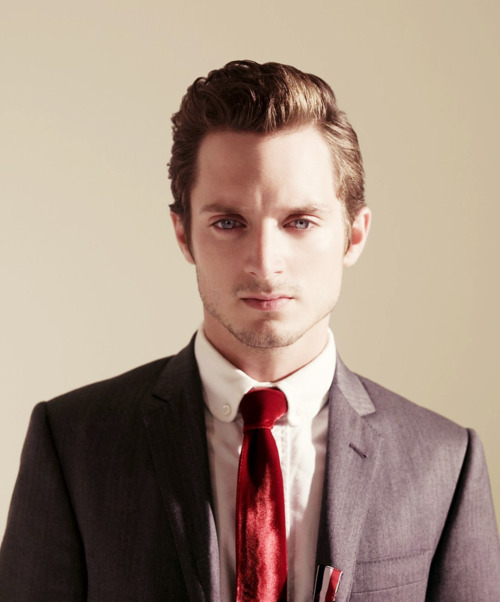 Monday Men Style: Santa Only Has Red For You.