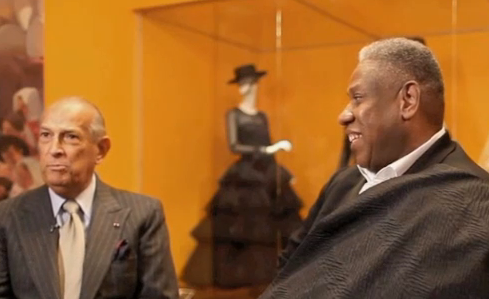 “The prolific designer and the Vogue Contributing Editor and cult fashion personality guide NOWNESS on a personal tour of the recently opened Joaquín Sorolla and the Glory of Spanish Dress  at the Queen Sofia Spanish Institute in New York. Conceived by De la Renta and curated by Leon Talley, the exhibit considers Spain’s sartorial legacy through the paintings of artist Joaquín Sorolla y Bastida (1863–1923), a selection of elaborate traditional costumes, and designs by industry icons Yves Saint Laurent, Cristóbal Balenciaga, Alexander McQueen and Karl Lagerfeld. Both encouraged to pursue their respective careers in fashion by the late, influential Vogue Editor Diana Vreeland, De la Renta and Leon Talley share an extensive personal and professional history, from dalliances in the heyday of studio 54 to endless backstage exchanges during fashion shows. “They were clearly so enamored by this show and what they had created,” says Moselle. “It was evident that this was a real partnership, an exchange between truly old friends, and a shared love of fashion and Spain. I think they could have gone on talking about it forever, had there been the time.”