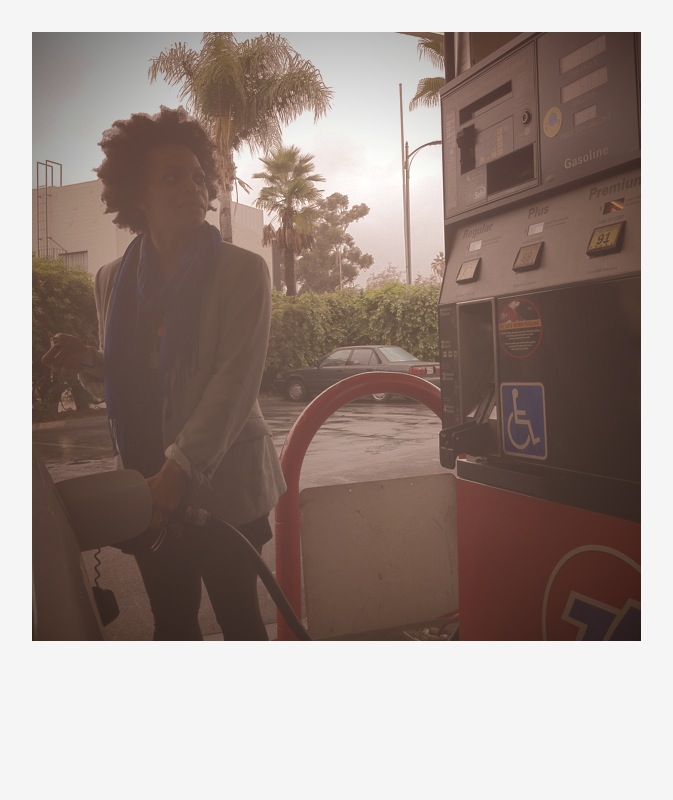 They said California wouldn’t be for me.  Since I’ve been a Yankee to the bone, not the team but the city, my first trip to the West Coast would of had me running back to the Eastward way of life. With the conversations had with some friends, who’ve been to LaLa Land, and being tainted from televisions shows and magazines, it was easy to believe what was told to me about California, but there is nothing like experiencing it for yourself and boy did I ever!

After years of invites and my fear of flying, it took the wedding of my good friend, Tiffany Chantra and now husband Randy Auerbach, for me to get on the jet-plane to the land of rich and famous in mansions not brownstones. 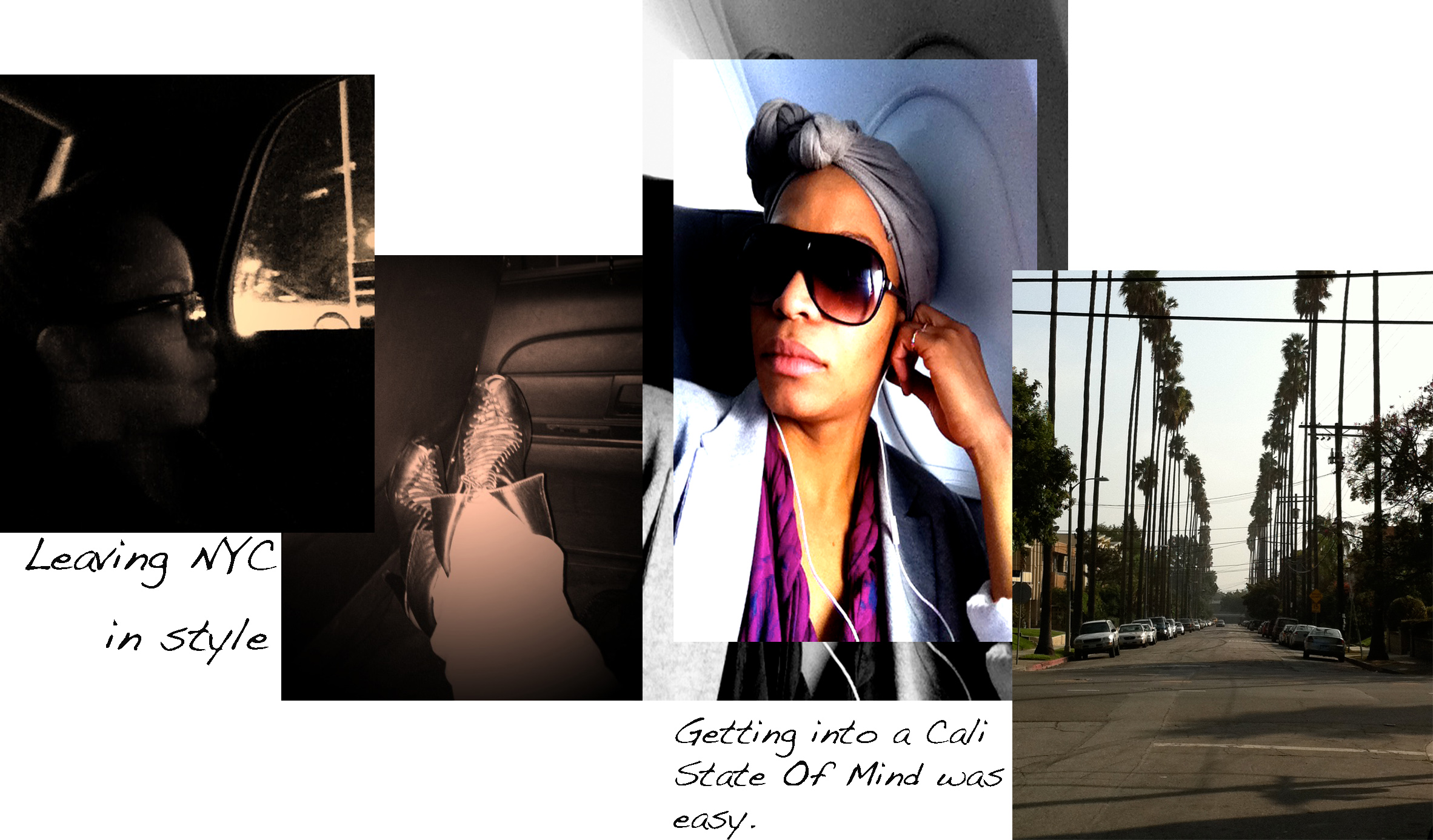 I got lucky with my first time here?  Traveling with fashion designer, friend and funny-man Isidoro Francisco from East to West guaranteed me never having a dull moment.  One of which was the adventure of making sure he didn’t miss the flight. Partying the night before wasn’t a good idea, but things happen… you know the rest. All Isidoro was able to get into the duffle bag before hailing a cab to the airport, was his suit, some underwear, MacBook and wallet. He made on time, we got our flight and slept, turban and all, all the way to Hollywood!

There were advantages to leaving New York without everything, in Isidoro’s case. He landed in California without shoes for the wedding, toiletries, and clothes for the rest of his stay, shopping would become a requirement during the trip, with no objection from me! 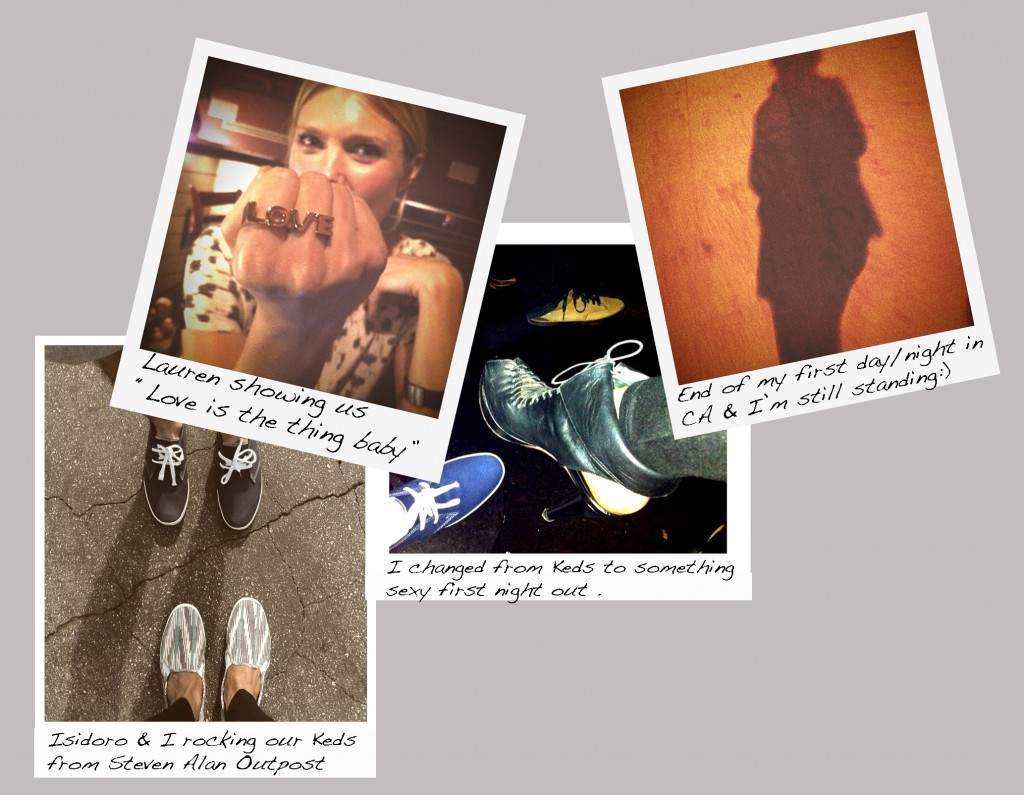 Actress and friend Lauren Schneider, was kind enough to pick us up from the airport and let us stay at her place.  She lives in Los Feliz Los Angeles, CA, neighborhood that just so happens to be the Williamsburg of CA. Good restaurants in walking distance, shopping 15 minutes away by car, I was a happy girl:)

No time was wasted once our feet hit the cool LA pavements. We got some lunch then got familiar with the layout of the land. Meaning: Figuring out where all the good deals were.

First pin drop was Steven Alan Outpost in LA., where I got some cool Keds on sale! A pat on the shoulder and I stopped myself, from doing all my shopping on the first day. Napping, dinner, then some dancing at the Short Stop on Sunset Blvd. The club had lighting like a 1970s prom and a music mix that had mod, hip-hop and reggae songs flowing together thanks to DJ David Orlando.

Day Two: Vintage was on the brain, and determination was my game.  I knew that good stuff would be found at low prices, but I wasn’t prepared for amount of shops that sold vintage clothes, shoes, accessories, etc all in one area! . Squaresville Vintage and Weltenbuerger were two vintage shops that had my carry-on suitcase screaming for dear life.  I took stuffing to a new level. Hard-case suitcase is the way to go ladies. 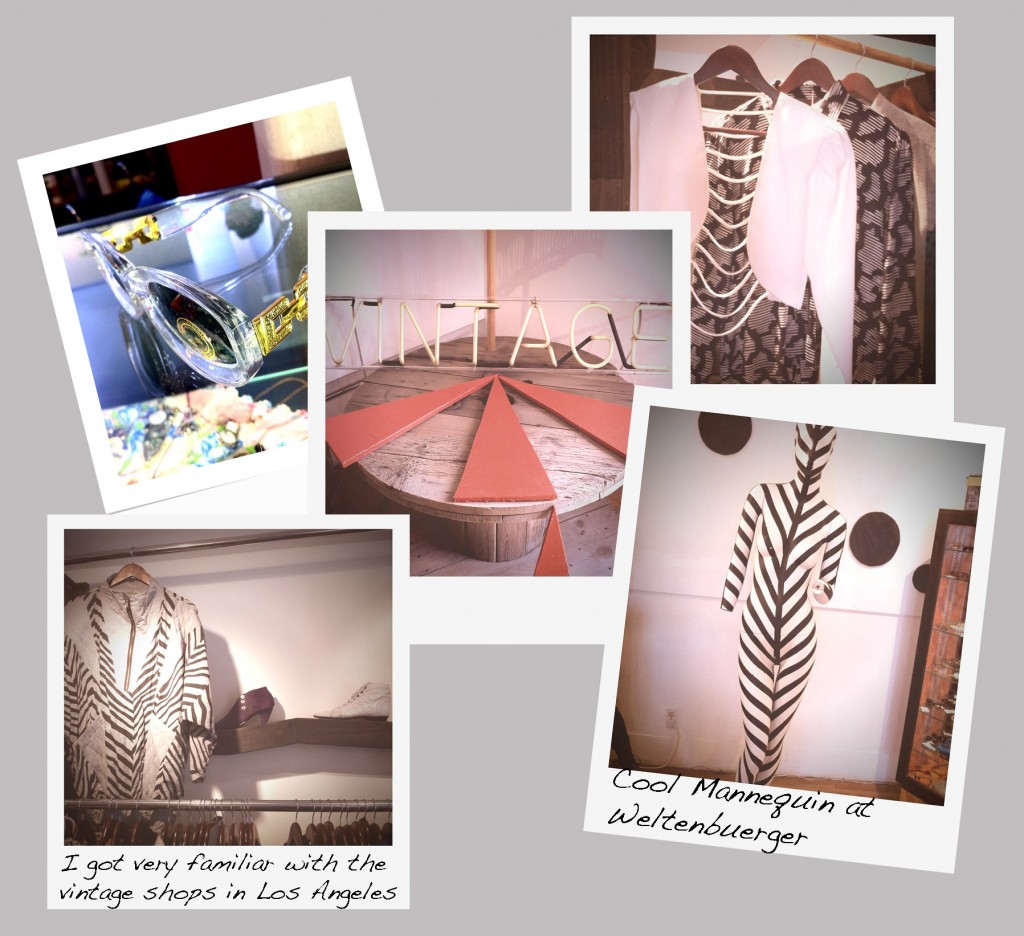 My Star for Life Sequins Top, found at Squaresville Vintage, turned out to crowd favorite at my friends’ rehearsal dinner, later that night. Also found some knits to keep me warm for the coming winter and jewelry, one of which completed my outfit the following night.

Nighttime was upon us for day two and it was time for the festivities to begin! Rehearsal dinner was the first time my friends and I got a chance to see and talk to the bride and groom, who proved with their outfits that looking and feeling good should go hand in hand.

Not wanting my night to end early, off to the clubs we went. Lauren, Isidoro and another NYC partner in crime, Christina Birkhead all partied at La Cita in downtown LA. They have a Punky Reggae Party ever Friday and my new favorite DJ, David Orlando, kept us on the dance floor until closing. 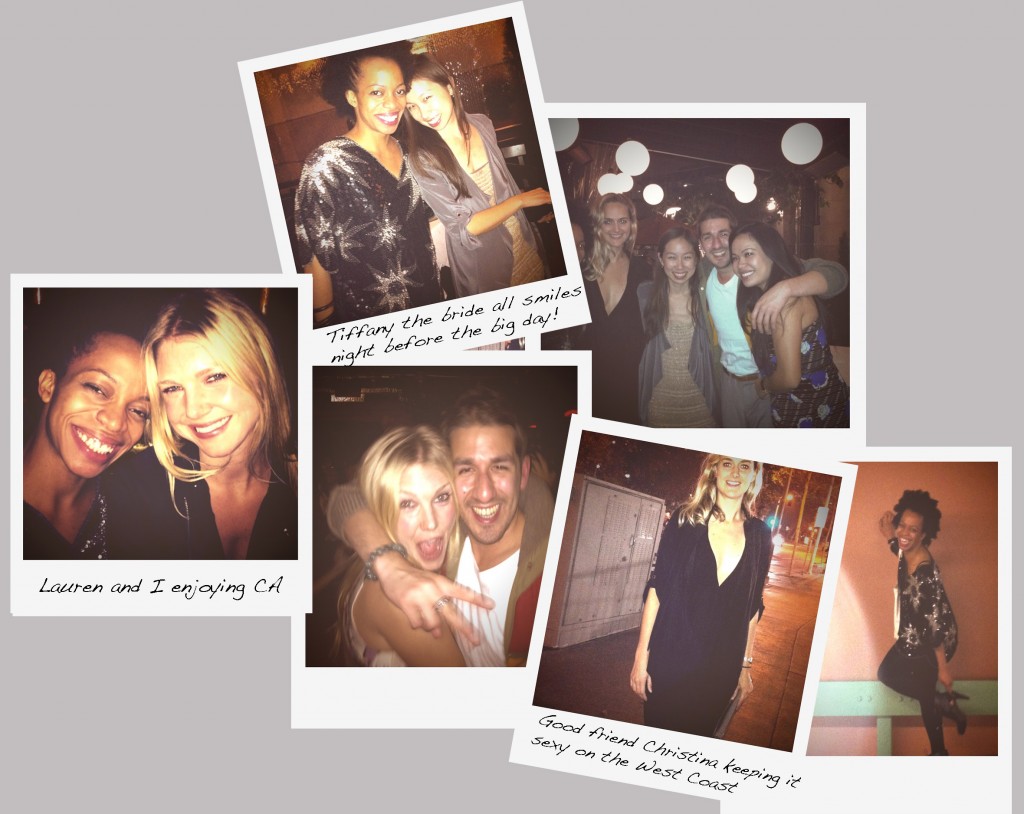 New friends were made in LaLaLand that night. Two of them are are Jada & John a husband and wife who owns their own online vintage store called lalalandvintageclothing.com. So now I can get vintage pieces online that won’t break the bank. Wish I knew about them before I purchased my dress for the wedding.

Day 3: Day of the wedding, and my friends and I are paying for the night before, with aching feet and headaches. Thank goodness it was an evening wedding! This gave us enough time to have some brunch at Figaro Bistrot. A french restaurant that reminds me of one in Brooklyn down to the tasty food we had.  This was a rushed meal since we had to get Isidoro shoes to go with his suit.  Atmosphere boutique a couple of doors down, turned out to be a great find. Not only did he find some cool shoes for his suit but also found a color blocking canvas high-tops on sale. Lucky boy:) 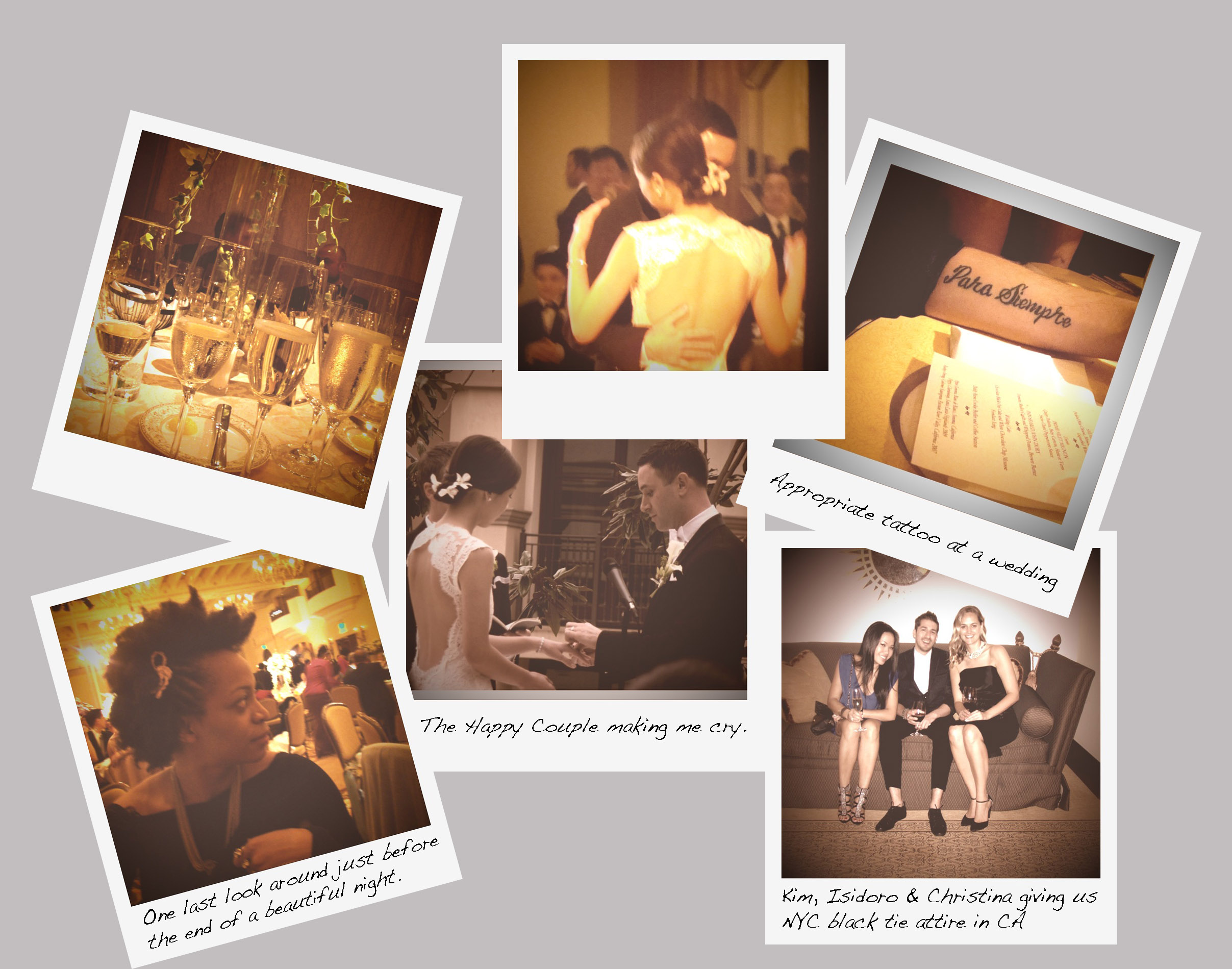 I cried, first time I’ve ever cried at a wedding. The love was in the air and all of us took it in, from the wedding vows, to the food, cake, dancing and the late sit down after party with new friends. It was a special night and I couldn’t be happier for the newlyweds!

All good things must come to an end, and this wedding was the best way to put a sealing kiss on my first trip to California.

What have I learned from my first trip to LaLa Land?

Everybody is an actor or actress.

Just being a New Yorker makes you a celebrity.

Last but not least, arrive in California with a suitcase containing only toiletries, underwear and one outfit, cause the phrase “retail therapy” will be abused.

Tell Me My Creative Friends.